Tim Taylor takes apart the foreign intellectual property debate down to the nub - guess what? Negotiation, not trade war, is warranted...
Payments from China for Foreign Intellectual Property
http://conversableeconomist.blogspot.com/2019/07/payments-from-china-for-foreign.html

It seems clear that China's government and firms have been aggressive in their pursuit of intellectual property from firms in other countries. Sometimes this aggressiveness comes from government rules that if a foreign firm wished to sell or produce in China, it needs to have a Chinese firm as a partner and to share technology with that firm. There are also widespread allegations of technology theft. I once chatted with a group of California tech executives who did business in China, and they all said that if they take a computer or a phone to China, they only take one where the memory has been previously wiped clean.

Measuring the total amount of technology transfer to China is, in its nature, hard to do. But one approach is to look at royalty payments from China to outside firms.  Ana Maria Santacreu and Makenzie Peake of the Federal Reserve Bank of St. Louis offer some data in "A Closer Look at China's Supposed Misappropriation of U.S. Intellectual Property" (Economic Synopses, 2019, No. 5). Of course, the rise in payments doesn't mean that the appropriate level of payments is being made. Annual payments from China to the US of about $8 billion for intellectual property don't seem extraordinarily high. And given that China's economy has been shifting from reliance on low-wage labor to an economy based more in technology and services, the pattern of intellectual property payments rising faster than GDP is the pattern one would expect.

Here's some additional data from Nicholas Lardy at the Peterson Institute for Economic Economics (April 20, 2018). This This figure shows the rise total payments from China to all countries for the use of foreign intellectual property.


This figure, also from Lardy, shows countries ranked by how much they pay in intellectual property fees. This figure illustrates something rather odd: the two countries that pay the highest charges for intellectual property are the relatively small economies of Ireland and Netherlands. As Lardy explains: "However, licensing fees in Ireland and the Netherlands are paid mostly by foreign holding companies that are legally domiciled in these countries for tax reasons. Since the subsidiaries of these holding companies using the licensed foreign technology are located in other jurisdictions worldwide, China probably ranks second globally in the magnitude of licensing fees paid for technology used within national borders." (A few years ago, I offered a description of the famous "Double Irish Dutch Sandwich" technique for multinational firms to reduce their tax liabilities.) 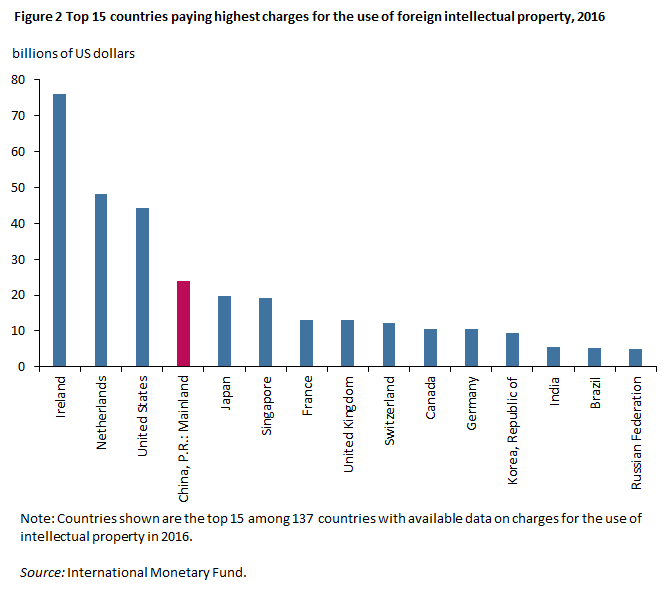 It may well be true that China should be paying more to other countries, including the US, for use of intellectual property. But the numbers in these tables suggest that in purely economic terms, a negotiated solution would be affordable and therefore possible. If a set of trade negotiations led to China doubling its royalty payments to the world as a whole, that additional $27 billion or so would certainly not cripple China's $13.6 trillion (converted at the current US dollar exchange rate) economy. On the other side, while this shift would be a nice windfall for some multinational companies around the world, it's not an amount that is likely to change the course of the $20.5 trillion US economy, either. Also, if the rules for making payments for foreign intellectual property were tightened up, it's likely that US firms already making such payments (as shown in the figure above) would see those payments rise, as well.
-- via my feedly newsfeed
Posted by The Red Caboose at 1:10 PM