Brexit Meets Gravity
Paul Krugman
https://www.nytimes.com/2018/07/10/opinion/brexit-meets-gravity.html
These days I'm writing a lot about trade policy. I know there are more crucial topics, like Alan Dershowitz. Maybe a few other things? But getting and spending go on; and to be honest, in a way I'm doing trade issues as a form of therapy and/or escapism, focusing on stuff I know as a break from the grim political news.

Anyway, as Britain's self-inflicted Brexit crisis (self-inflicted with some help from Putin, it seems) comes to a head, it seems to me worth trying to explain some aspects of the economics involved that should be obvious – surely are obvious to many British economists – but aren't, apparently, as obvious either to Brexiteers or to the general public.

These aspects explain why Theresa May is trying to do a soft Brexit or even, as some say, BINO – Brexit In Name Only; and why the favored alternative of Brexiteers, trade agreements with the United States and perhaps others to replace the EU, won't fly.

Now, many of the arguments for Brexit were lies pure and simple. But their claims about trade, both before and after the vote, may arguably be seen as misunderstandings rather than sheer dishonesty.

In the world according to Brexiteers, Britain needn't lose much by leaving the EU, because it can still negotiate a free trade agreement with the rest of Europe, or, at worst, face the low tariffs the EU imposes on other non-EU economies. Meanwhile, Britain can negotiate better trade deals elsewhere, especially the US, that will make up for any losses on the EU side.

What's wrong with this story? The first thing to understand is that the EU is not a free trade agreement like NAFTA; it's a customs union, which is substantially stronger and more favorable to trade.

What's the difference? In NAFTA, most Mexican products can enter the U.S. tariff-free. But Mexico and the U.S. don't charge the same tariffs on imports from third parties. This means that Mexican goods entering the U.S. still have to face a customs inspection, to make sure that they're actually Mexican, not, say, Chinese goods unloaded in Mexico and trucked across the border to bypass U.S. tariffs.

And actually it's worse than that, because what is a Mexican good, anyway? NAFTA has elaborate rules about how much Mexican content is required to qualify for zero tariffs, and this adds a lot of paperwork and frictions to intra-NAFTA trade.

By contrast, the EU sets common external tariffs, which means that once you're in, you're in: once goods are unloaded at Rotterdam they can be shipped on to France or Germany without further customs checks. So there's much less friction.

What It Costs to Be Smuggled Across the U.S. Border

And frictions, not tariffs, are what businesses are complaining about as Brexit draws near. For example, the British auto industry relies on "just-in-time" production, maintaining low inventories of parts, because it has been able to count on prompt arrival of parts from Europe. If Britain leaves the customs union, the risk of customs delays would make this infeasible, substantially raising costs.

Still, even if leaving the customs union would be costly, couldn't Britain make up for that by getting a really good deal with Donald Trump's America? No.

Certainly the U.S. couldn't offer hugely valuable tariff reductions, for the simple reason that our tariffs on EU products – like EU tariffs on our products – are already quite low. You can find examples of high tariffs, like our 25 percent tariff on light trucks, but overall there just isn't much to give.

What about a Britain-U.S. customs union? That would be hugely problematic, among other things because given the asymmetry in size Britain would effectively be giving Washington complete control over its policy. Beyond that, no deal with the U.S. could be worth as much as Britain's customs union with its neighbors, because of gravity.

What? One of the best-established relationships in economics is the so-called gravity equation for trade between any two countries, which says that the amount of trade depends positively on the size of the two countries' economies but negatively on the distance between them. You can see this very clearly in British exports. Here's British exports to selected countries as a percentage of the importing country's GDP, plotted against the distance to that country:
Image 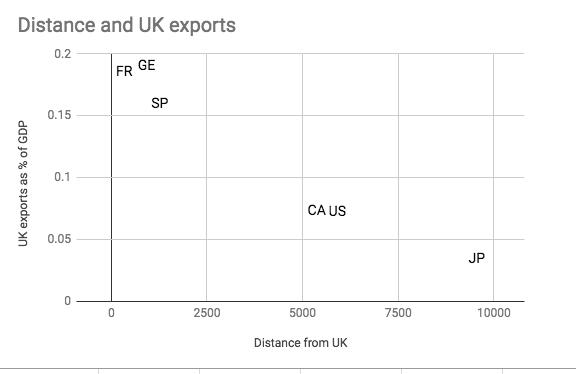 The point is that while America offers a market comparable in size to that of the EU, it's much further away, so that even if the UK could make an incredible deal with us, it wouldn't be worth nearly as much as the customs union they have.

All of this explains why May is trying to negotiate a deal that keeps the customs union intact. But that, of course, ain't much of an exit: Brussels will still set UK trade policy, except that Britain will no longer have a vote. So what was the point of Brexit in the first place?

Good question. Too bad more people didn't ask it before the referendum.

-- via my feedly newsfeed
Posted by The Red Caboose at 9:45 AM