Is it Time for the American Dream to Die? [feedly]

Is it Time for the American Dream to Die?
http://www.globalpolicyjournal.com/blog/11/05/2017/it-time-american-dream-die

Is it Time for the American Dream to Die?

Paula Serafini explores the paradox of Trump's wealth, the lack of social mobility, and voting patterns in contemporary America.

Commentators tend to agree on two main reasons for the rise and presidential victory of Donald Trump. His defiance of convention at a time when the institutions of democracy were (and still are) in crisis is often mentioned. Equally so his successful manipulation of the public's emotions at a time of financial insecurity, anger, and disappointment.

But precisely because times are tough and many in the US are affected by unemployment and lack of prospects, it is still baffling to some that a billionaire — and quite an ostentatious one for that matter — could win the sympathy of large sectors of the working class. Did Trump win the elections because of – or in spite of – his wealth?

Contrary to Hillary Clinton, who like many in the educated elite publicly acts as if embarrassed of her wealth, Trump flaunts it. Wealth is a part of his image (think dramatic entrances in luxurious escalators and golden lifts). Despite the fact that he was born into wealth, Trump positions himself as a "self-made man", the epitome of the American dream. In fact, one of Trump's selling points was that he would "make America great again": this meant bringing back the American dream.

The American dream, a term first coined in 1931 by historian James Truslow Adams, is the idea that anyone, regardless of their background and standing, can aim for a more prosperous life for themselves and their children. This dream has for some time been in crisis, and Trump himself went as far as bemoaning the dream's death. And overall, Trump's policies do not favour social mobility for the working class. How was it then that a billionaire who favours corporations and the rich was able to emerge as a champion of the American dream?

The rejection of intellectualism

Higher education in the US, he said, is no longer a channel for upward mobility for white working class voters due to increasing fees and lack of financial aid. Therefore, universities and the intelligentsia that emerges from them are seen as sites of exclusion (although universities are still seen as channels for upward mobility for other sectors of society, such as ethnic minorities and migrants).

Becoming an intellectual is, for most of the white working class, not an option any more. This is a fact that has been linked to rising anti-intellectualism and the rejection of experts in the US as well as in the UK. It was also seen during the Brexit campaign. And it is why, as economic sociologist Wolfgang Streeck argues, "the election was as much about Clinton losing as Trump winning". As Graeber suggested:

'If people vote against their obvious economic interests, then it can only be because one cannot, really, separate the economic issues from social and cultural ones.'

Republicans and the rich CEOs they defend and represent, on the other hand, do not stand for the intellectual class (even if they are, in fact, Ivy League graduates too). A working class voter therefore identifies more easily with the wealth of the Republican than with the intellectualism of the Democrat because the agonising myth of the American Dream still tells them that wealth is something their children can hope to achieve (if they work hard, if they are lucky, if an opportunity presents itself).

In Trump's hands, therefore, wealth becomes something to be flaunted. He similarly flaunts a combination of other attributes and values, such as patriotism, strength, boldness and virility.

This aspect of Trump's image is important because patriotism is widespread in US American working class culture. The American dream of making it financially is tied to a set of patriotic cultural values, ideas and images. These are reinforced in cultural events such as the hard-to-forget musical performance of the "USA Freedom Kids" which featured excessive use of the Stars and Stripes, the repetition of words like freedom, and the allusion to the US as a world leader and military power. The idea of the American dream is built on the combination of "wholesome" US American values and military prowess.

Perhaps the combination of factors making up Trump's appeal is best represented in the epic USA-on-steroids image by artist James Heuser. This over the top image (which the artist claims has no political agenda), features Trump on a tank with golden fixings, cash being thrown around, and an eagle with a machine gun. The image was adopted by Trump fans, but could as easily be seen as a parody, or perhaps, as a representation of the American dream in the age of Trump. 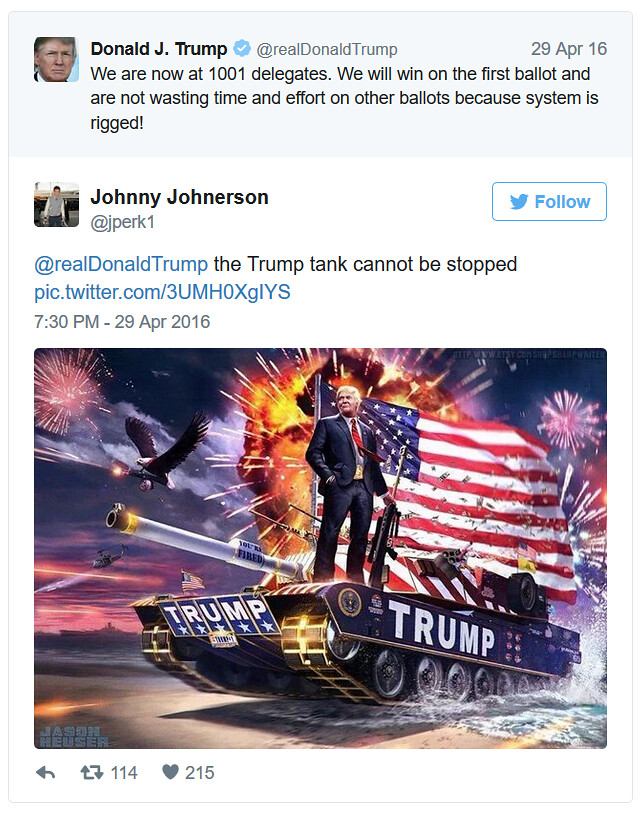 The success of Trump and his unashamed, extravagant display of wealth is the defeat of the claim "we are the 99%", the slogan of a dream for equality that emerged with Occupy Wall Street. A Trump-like kind of wealth only comes at the expense of the lacks of others. Trump's status as a poster boy for the American dream legitimises the idea that this dream implies inequality, as well as reinforcing individual progress, a cult of the military, and anti-intellectualism (which in turn feed other elements of Trump's agenda, namely racism and islamophobia).

The question is: can this American dream-turned-apocalyptic-nightmare be redefined? Or must this pervasive myth be binned in order to strive for post-capitalist practices of equality, community and interdependence, in the US and beyond?

-- via my feedly newsfeed
Posted by The Red Caboose at 1:48 PM