Over the weekend, the FT published my review of Nicholas Eberstadt's important new book Men Without Work.  The core message is captured in the graph below. 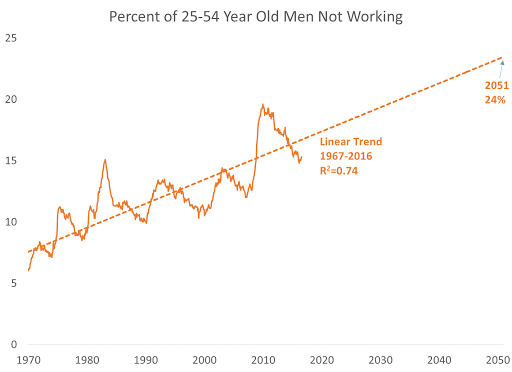 Job destruction caused by technology is not a futuristic concern.  It is something we have been living with for two generations.  A simple linear trend suggests that by mid-century about a quarter of men between 25 and 54 will not be working at any moment.

I think this is likely a substantial underestimate unless something is done for a number of reasons.  First everything we hear and see regarding technology suggests the rate of job destruction will pick up.  Think of the elimination of drivers, and of those who work behind cash registers.  Second, the gains in average education and health of the workforce over the last 50 years are unlikely to be repeated.  Third, to the extent that non-work is contagious, it is likely to grow exponentially rather than at a linear rate.  Fourth, declining marriage rates are likely to raise rates of labor force withdrawal given that non-work is much more common for unmarried than married men.

Will we be able to support these people and a growing retired share of the population?  What will this mean for the American family?  For prevailing ethics of self-reliance?  For alienation and support for toxic populism? These are vital questions.  Even more vital is the question of what is to be done. These questions should preoccupy social science researchers.  They are vital to our future.

-- via my feedly newsfeed
Posted by The Red Caboose at 6:08 AM